Tommaso Previato holds a joint Ph.D. degree from Sapienza University of Rome (Civilizations, Cultures and Societies of Asia and Africa) and Minzu University of China (School of Ethnology and Sociology). He is an historically minded ethnologist who currently serves as Postdoctoral Fellow at Academia Sinica’s Institute of History and Philology, and Assistant Editor at Ming Qing Studies. His research interests lie in the anthropology of western China, in particular of the so-called “Ethnic Corridors”, with a focus on religious networks and transmission of heterodox cults. Some of his findings relate to Sufi sectarianism in mid- and late-Qing Gansu, and broadly to the history of Islam in China. More recently, he is taking on a new intellectual endeavor in the comparative study of early modern heresies which is aimed at expanding the existing canon of theories on witchcraft and ritual practice, as well as of gender-based approaches to violence, fear and scapegoat making. 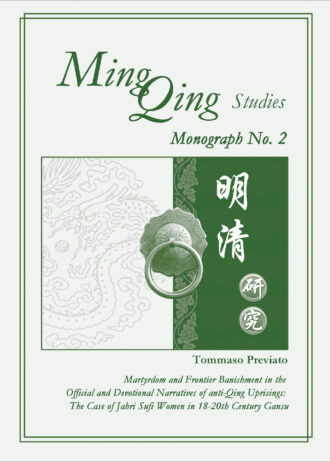 Ming Qing Studies Martyrdom and Frontier Banishment in the Official and Devotional Narratives of anti-Qing Uprisings: The Case of Jahri Sufi Women in 18-20th Century Gansu